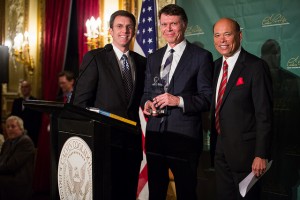 Our Second Annual Gala Awards Dinner, held on November 6th, 2014 at the Metropolitan Club in Manhattan, was a smashing success! We congratulate Dr. Donald Boudreaux, the winner of the 2014 Coolidge Prize for Journalism, and the runner-up, Bhekuzulu Khumalo! We also congratulate Sydney Benjamin of Peacham, Vermont, the winner of the 2014 Calvin Prize for Vermont Youth, and runner-up Jay Tilden of St. Johnsbury, Vermont!

We are especially grateful to our debaters for the evening, Canadian Parliamentarian and prominent journalist Chrystia Freeland and economist and former Texas Senator Phil Gramm. Their debate on income inequality was insightful, provocative, and extremely magnanimous. Special thanks also go to the high school students who debated income inequality with panache and verve: Rory Flynn and Lloyd Lyall from Team Canada, and Tiana Menon and Amelia Miller from Team USA. These prodigious young people represent their respective countries at debate tournaments across the globe, and we were so pleased they were able to join us in New York.

To view more pictures of the event please visit our Coolidge Foundation Flickr.