This article appears in the July 2016 issue of The Coolidge Quarterly.

As the Republican Party prepares to convene its nominating convention in Cleveland in July 2016, the party could well look back to 1924 with genuine nostalgia. It was also in Cleveland that the party faithful gathered in 1924, but what a difference 92 years can make. The 1924 Republican convention was universally proclaimed “one of the dullest in history,” while the 2016 convention promises to be a bit more lively.

One thing that has not changed in 92 years is the fact that Cleveland is a logical host city for the Republicans. No Republican president has ever been elected without carrying the State of Ohio. In 1924, Cleveland symbolized the automotive manufacturing boom that was propelling the American economy to unprecedented prosperity. The Cleveland of 2016 is hardly a boomtown, but Ohio’s electoral votes are still crucially important to winning the presidency. 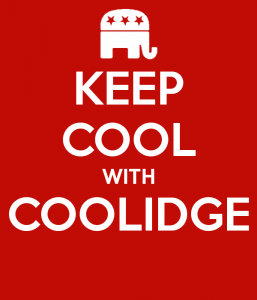 By June, 1924, as the delegates began to converge on Cleveland’s shiny new 12,000-seat Public Auditorium, it was apparent to all that Calvin Coolidge would be the nominee. While first known as “the accidental president” as he ascended to the presidency at the death of Warren Harding a year earlier, Coolidge had masterfully consolidated his hold on the Republican Party during his “honeymoon period” of public goodwill. He had managed both to push forward Harding’s popular, conservative agenda and, at the same time, to disassociate himself from the scandals that emerged after Harding’s death. Indeed, as William Allen White was to write about Coolidge, he was already resonating with the public as “this cautious, unassuming Vermonter who embodied the virtues of probity and moderation, dutifulness and thrift.”

Coolidge’s first year had been so successful that his only challenge came from the most extreme fringe of the progressive wing of the GOP. By 1924, Senator “Fighting Bob” La Follette of Wisconsin had concluded he had best fight outside the GOP and moved to revive the old Progressive Party of Theodore Roosevelt. In response, Coolidge skillfully courted a number of the more moderate Republican progressives, especially Idaho Senator William Borah, and convinced them to remain in the GOP. By the opening of the Cleveland convention, La Follette’s threat from the left was decidedly fading.

As the delegates began to assemble in Cleveland, there was very little excitement in the air. As one newspaper noted, “Except for some anticipation about a fight for the vice presidential nomination, the preparation for this convention as a whole went ahead with almost as much quiet and decorum as a New England town meeting.” The opening ceremonies proceeded tediously as Harding was hailed as “the fallen warrior” and Coolidge as his “most worthy successor.” Fully 4,000 of the auditorium’s 12,000 seats were empty, the other 8,000 were filled with delegates struggling to remain awake. There was obviously no drama here; for, although Coolidge would not be nominated formally until two days later in the week, the convention on opening day announced the delegation that would officially notify him of his nomination.
The New York Herald Tribune headline ran, “Convention Runs as Smoothly as Machine That Makes Nails.” The reporter noted that the convention “was generally a cold, cautious, programmed, standardized, and lugubrious affair….Superficially it is as methodical as a machine that makes wire nails.” Apparently the manufacturing of wire nails was a Cleveland specialty. In any event, things got so dull that humorist Will Rogers, the Jon Stewart of the era, advised Cleveland “to open up its churches to liven things up a bit.”

The convention organizers left nothing to chance. There was to be only one name placed into nomination before the balloting began. A lengthy nominating speech was followed by nine seconding speeches after which the convention chairman swiftly brought down his gavel to close the nominations. The most memorable line of the night was when one of the seconders thundered, “Coolidge never wasted any time, never wasted any words, and never wasted any public money.” The candidate could not have stated the case better himself, and the delegates responded by making his nomination unanimous. Only Will Rogers seemed despondent: “I’ve been longin’ to attend a convention and see the excitement. Now, when I do get a chance, I draw this one.”

In the midst of this well-choreographed tedium, there was one amusing side note. Ever vigilant for an opportunity to under-gird the president’s homespun image, the Coolidge managers had ensured that the press was covering the president’s father, Col. John Coolidge, up in Vermont. Earlier that week, headlines announced, “Crops Keep Coolidge’s Father From Cleveland.” Old Col. Coolidge had turned down the invitation of the Republican National Committee to attend the convention because his spring planting was “a little later than normal this year,” but the party installed a new radio in the same simple living room where son Calvin had taken the oath of office the preceding year. The June 13 New York Times headline proclaimed, “Colonel Coolidge In Tears Hears Son Nominated.” The article went on to report, “As the cheers which greeted the President’s name came to him through the air, the old man’s eyes watered, but his nerves were steady and he calmly took out his watch and timed each long round of applause.” That picture of Col. Coolidge by the radio was worth a thousand pages of newsprint. The American public seemed convinced that Calvin Coolidge was indeed the real thing – an unassuming, honest, hardworking, and thrifty New England patriot.

As mentioned above, the dissension at New York cost the Democrats dearly. The Democrats dealt Coolidge a winning political hand. Coolidge played that hand masterfully, by remaining distant and low-key. The selection of Charles Dawes as vice presidential candidate was not as smooth as Coolidge’s nomination, but what mattered was that Dawes’s name reinforced the matter-of-fact culture of the campaign. After all, Dawes was known as an enforcer and a budgeteer.

Fate also kept Coolidge quiet. The weeks following the convention witnessed the tragic and unexpected death of Coolidge’s 16-year-old son, Calvin, Jr. Coolidge spent much of the rest of the campaign period in mourning – making him a distant and (to voters) increasingly fascinating figure.

After the Cleveland convention, the Progressives continued to fade. While La Follette took a handsome 16.6 percent of the popular vote in November, the Progressive candidate carried only his home state of Wisconsin. Coolidge by contrast managed 54 percent, an absolute majority of the general election vote, winning more popular support than the other two parties combined.

One Response to “Boring Towards Victory: the Story of the 1924 Republican Convention”