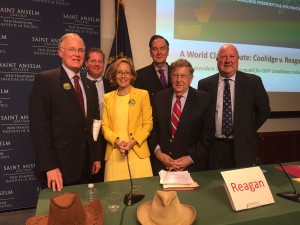 This past October the Coolidge Foundation partnered with Saint Anselm College’s New Hampshire Institute of Politics to host a world class debate on the merits of the Coolidge and Reagan presidencies. In a very close vote, the overflow crowd that evening in Manchester, NH, decided the debate in favor of President Reagan.

Now you can be the judge!

That’s because C-SPAN has just announced that it will air our “Coolidge vs. Reagan” debates on C-SPAN3’s American History TV.

After each program airs, you will also be able to view it online on the American History TV website, here. In the meantime, check out this promotional clip that C-SPAN has just released.

We hope you will tune in and let us know which side you thought won this “Coolidge vs. Reagan” debate!

2 Responses to “C-SPAN to Air “Coolidge vs. Reagan” Debate”