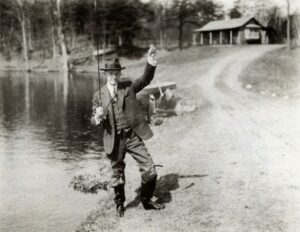 As spring nears its arrival many Americans, if not already, are getting ready to enjoy another fishing season. Many anglers fish throughout the year either in the warm waters of the south or in the frozen lakes of the north. Fishing is a great sport that not only allows us to enjoy the outdoors, but also to spend quality time with family and friends. Many of our past-presidents have been avid fishermen. Perhaps the most famous fisherman to occupy the White House was Herbert Hoover. President Calvin Coolidge also enjoyed fishing, spending time outdoors, and the joy of animals.

President Calvin Coolidge in addressing the sport of fishing and hunting stated:

“These are true outdoor sports in the highest sense, and must be pursued in a way that develops energy, perseverance, skill, and courage of the individual. They call for personal direction, and can not be taken up vicariously. There is a great wealth of life and experience in this field which is never exhausted, and always fresh and new. It is accompanied by traits of character which make a universal appeal. A knowledge of these arts may well be cultivated and cherished like a knowledge of the humanities and the sciences. Around hunting and fishing is gathered a great wealth of prose and poetry, which testifies to the enduring interest which these sports have held all through the development of the race.”[1]

At first, Coolidge did not have the passion for fishing as Hoover did: “he began the sport almost grudgingly but soon developed zest for it, and by the end of his term he had become a passable fisherman.”[2] Herbert Hoover, who served as Secretary of Commerce, in the Coolidge Administration described President Coolidge as a fisherman:

“President Coolidge apparently had not fished before the election. Being a fundamentalist in religion, economics, and fishing, he began his career for common trout with worms. Ten million fly fisherman at once evidenced disturbed minds. Then Mr. Coolidge took to a fly. He gave the Secret Service guards great excitement in dodging his backcast and rescuing flies from trees.”[3]

Whether fishing Wisconsin’s Brule River or another location, Coolidge “alternated between flies and worms” as he fished.[6] “He loved to bait his own hook, and when he had finished, there were so many worms on the hook that it was a wiggling mass the size of a golf ball — Cal was not a man to take chances,” wrote Wert.[7]

Coolidge’s fly fishing skills may not have matched the more experienced Hoover, but as with many fisherman, Coolidge found the peace and challenge of fishing to be a great joy.

Photo courtesy of the American Museum of Fly Fishing

One Response to “Calvin Coolidge and the Joy of Fishing”