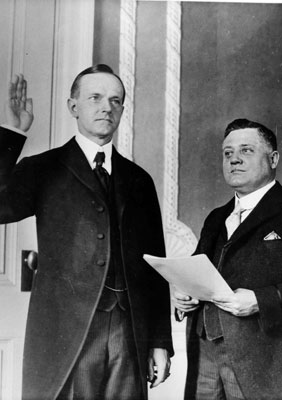 Much like our present time, Coolidge’s era was one of great interest in and debate about the nature of the U.S. Constitution. Constitutional historian Melvin I. Urofsky described the 1920s “as a battleground between traditionalists fearful of the new ways and modernists eager to shed the shackles of older ideas and practices.”[i] At the center of this battle was the Constitution and whether the Constitution was a document that limited the role of government or evolved and changed to meet the challenges of the 20th century by giving the federal government more power.

Coolidge was a central player in this debate, defending the Constitution, limited government, and economic liberty against the impulse to create a stronger federal government through an activist administrative state as promoted by some former presidents.

Coolidge’s interest in the constitution dated back to his youth. In his Autobiography, Coolidge described an early memory of his education, writing:

For some reason I was attracted to civil government and took that. This was my first introduction to the Constitution of the United States. Although I was but thirteen years old the subject interested me exceedingly. The study of it which I then began has never ceased, and the more I study it the more I have come to admire it, realizing that no other document devised by the hand of man ever brought so much progress and happiness to humanity.[ii]

Yet far beyond just an area of interest, the Constitution was a real guide for Coolidge and his administration. “It is a fundamental principle of our country that the people are sovereign. While they recognize the undeniable authority of the state, they have established as its instrument a Government of limited powers, argued Coolidge.”[iii]  His policies reflected this philosophy. Whether it was spending and tax reduction, defending property rights, tariff policy, immigration, foreign policy, among other areas, Coolidge reflected a constitutional approach to public policy. As historian Paul Moreno wrote, “as President, he [Coolidge] often observed that demands for unconstitutional federal laws arose from the states’ failure to act…”[iv]  In fact some scholars have argued that he was “America’s last constitutional President.”[v]

Coolidge also understood that the principles of the American Founding — both the Declaration of Independence and the Constitution — do not change or alter from decade to decade as some argued. Coolidge stated:

It is often asserted that the world has made a great deal of progress since 1776, that we have had new thoughts and experiences which have given us a great advance over the people of that day, and that we may therefore very well discard their conclusions for something more modern. But that reasoning cannot be applied to this great charter. If all men are created equal, that is final. If they are endowed with inalienable rights, that is final. If governments derive their just powers from the consent of the governed, that is final. No advance, no progress can be made beyond these propositions.[vi]

Just as with the Founders, Coolidge also believed that in order for the Constitution and self-government to survive, the people had to be vigilant in its preservation and knowledgeable about American history and institutions.  Coolidge argued that “to support the Constitution, to observe the laws, is to be true to our own higher nature. That is the path, and the only path, towards liberty. To resist them and violate them is to become enemies to ourselves and instruments of our own destruction.”[vii]

In writing the “foreword” to James M. Beck’s The Constitution of the United States Coolidge wrote that “it is of first importance that the study of the Constitution should be [an] essential part of the education of the American youth.”[viii]  He also warned that “the Constitution is not self-perpetuating:”[ix]

If it is to survive, it will be because it has public support…The Constitution of the United States is the final refuge of every right that is enjoyed by any American. So long as it is observed, those rights will be secure. Whenever it falls into disrespect or disrepute, the end of orderly organized government, as we have known it for more than one hundred and twenty-five years, will be at hand. The Constitution represents a government of law. There is only one other form of authority, and that is a government of force. Americans must make their choice between these two. One signifies justice and liberty; the other tyranny and oppression. To live under the American Constitution is the greatest political privilege that was ever accorded to the human race.[x]

Historian John Van Til wrote that Coolidge’s “thought life had two principal features,” which centered on a Christian worldview and a “deep devotion to the Founding Fathers and their achievements in creating the American System, its substance being on display in the Declaration of Independence and the Constitution.”[xi]

These were the values that made Coolidge’s presidency not only a success, but an example for policymakers of all eras. Coolidge’s commitment to the Constitution and the principles of the American Founding is as relevant today as it was in the 1920s.

[iv] Paul Moreno, The American State from the Civil War to the New Deal: The Twilight of Constitutionalism and the Triumph of Progressivism, Cambridge University Press, New York, 2013, p. 178.

[xi] L. John Van Til, “He Revered the Founders,” in Why Coolidge Matters: How Civility in Politics Can Bring a Nation Together, The National Notary Association, Chatsworth, California, 2010, p. 113.