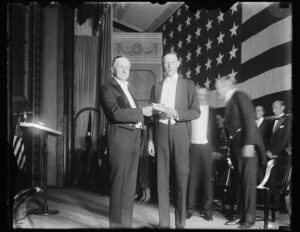 Historian Jerry Wallace once wrote that Charles Lindbergh is “the exception to Emerson’s rule that all heroes become bores. His name still retains its magic.”

Lindbergh’s name obtained this magic on May 21, 1927 as he landed his plane, The Spirit of St. Louis, at Le Bourget Aerodome outside Paris, marking the completion of the first non-stop, solo, transatlantic flight in world history. His flight originated at Roosevelt Field in New York, 3,600 miles from its final destination. The flight was inspired by Raymond Orteig’s offer of a $25,000 prize to the person who could complete the first non-stop flight from New York to Paris. Lindbergh’s accomplishment marked a new era in the history of human transportation. The prize itself was news, since its value equaled $333,000 in today’s dollars.

Shortly after his arrival in Paris, Lindbergh received a telegram from President Calvin Coolidge that read “The American people rejoice with me at the brilliant termination of your heroic flight. The first non-stop flight of a lone aviator across the Atlantic crowns the record of American aviation…”

On June 11, 1927, President Calvin Coolidge and First Lady Grace Coolidge welcomed Lindbergh at the Washington Monument. Coolidge’s congratulatory remarks and Lindbergh’s humorous response were broadcast on radio across the nation. Coolidge awarded to Lindbergh the first Distinguished Flying Cross. In his speech at the ceremony, Coolidge praised Lindbergh as a symbol of the spirit of America:

“And now, my fellow citizens, this young man has returned. He is here. He has brought his unsullied fame home. It is our great privilege to welcome back to his native land, on behalf of his own people, who have a deep affection for him and have been thrilled by this s
plendid achievement, a colonel of the United States Officers’ Reserve Corps, an illustrious citizen of our Republic, a conqueror of the air and strengthener of the ties which bind us to our sister nations across the sea…”

Lindbergh’s grand accomplishment stands as a landmark in aviation. If you’d like to learn more, you can listen to President Coolidge’s speech honoring Lindbergh, and read Jerry Wallace’s piece “Colonel Charles Lindbergh: the Conqueror of the Air” on our website.