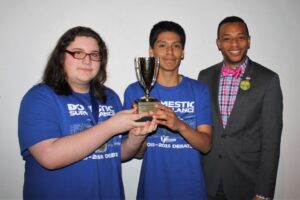 Government surveillance was the point of contention at the Coolidge Foundation’s third Coolidge Cup Qualifying tournament, held with the Dallas Urban Debate Alliance on April 8th and 9th at Bryan Adams High School in Dallas, Texas. Students debated whether the government should curtail its surveillance of private citizens. Nearly 100 students participated in this exciting policy debate.

On Saturday morning Foundation program associate Rushad Thomas and Southern Methodist University debate coach Ben Voth faced off in a spirited mock debate for the students, with Dr. Voth taking the pro-side and Rushad taking the con-side. The students also had the opportunity to submit video entries for the Bill of Rights Institute-Coolidge Foundation-National Speech and Debate Association video competition on whether political correctness has gone too far. A number of debaters submitted very impressive videos. 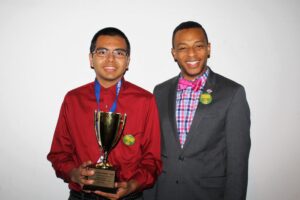 At the end of the debates the Foundation award scholarships to the four top students to attend our World Schools Debate Camp and compete in the Coolidge Cup championship. Those four students were Debra Martinez, Alejandro Posada, Ildefonso Sanchez, and Storm Lassiter. We greatly look forward to welcoming Debra, Alejandro, Ildefonso, and Storm to Plymouth Notch this summer, and we hope you will participate as well by registering to judge debate.