Recently our Foundation Chairman, Amity Shlaes, unearthed a Library of Congress audio recording of President Coolidge speaking about the institutions of our government. In the recording, the President says “the first duty of a government is to be true to itself. This does not mean perfection, it means a plan to strive for perfection. It means loyalty to ideals. The ideals of America were set out in the Declaration of Independence, and adopted in the Constitution. They did not represent perfection attained, but perfection found. The fundamental principle of freedom. The fathers knew that this was not yet apprehended. They formed a government firm in the faith that it was ever to press toward this high mark.”

For more than 200 years the people of the United States have worked for a more perfect union. As President Coolidge said, this goal has not yet been attained, but it remains our goal nonetheless. Through the democratic process we seek to perfect our union, giving the power of self-government not to autocrats and aristocracy, but to the people.

“In political affairs the vote of the humblest has long counted for as much as the vote of the most exalted,” President Coolidge went on to say in that speech. Truer words have never been spoken. Representative Democracy is the greatest form of government known to man. It certainly has its problems, but to paraphrase Winston Churchill, we have yet to divine a better way of ordering public affairs. Our job as citizens is to make sure our democracy continues functioning for the benefit of all, which is why we should all vote.

The Coolidge Foundation is a nonpartisan institution, we do not advocate any political causes or candidates. We do, however, work to educate the American people about the institutions of our democracy which Calvin Coolidge cherished so greatly. Our democracy will only work if our citizenry reflects deeply on its foundational precepts. In our small way we strive to further the progress of civic education to make our fellow Americans, and particularly young people, more active and engaged citizens. We hope you will do the same! 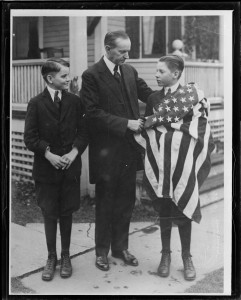