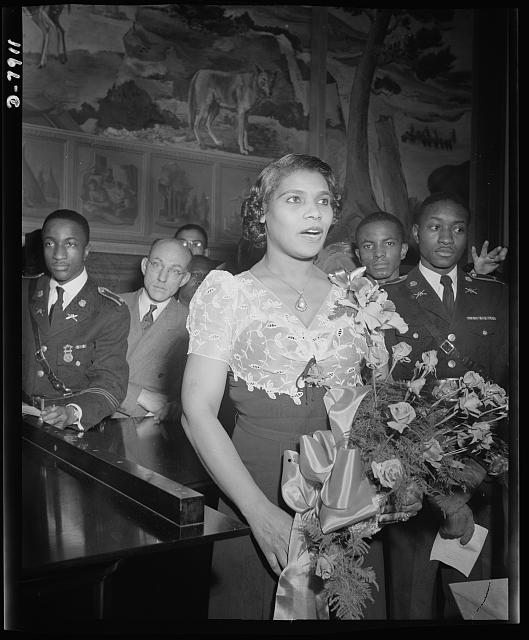 This photo of the great singer Marian Anderson was taken during World War II. Most of us associate Anderson’s performances in Washington with her most famous one, the 1939 appearance at the Lincoln Memorial. We recently stumbled across an article that reminded us that the iconic contralto had performed in Washington even before the 1930s.

In November, 1925, Anderson sang at the first couple’s church, First Congregational.The Washington Post reported on Nov. 8, 1925, that Miss Anderson would perform at the church in a benefit concert sponsored by the College Alumnae Club. The Club, an association of African-American female college graduates, provided scholarships for African-American girls hoping to attend college.

More reports came after the appearance. “There was a large audience of both white and colored people,” later commented one of the period wire services, the Preston News. This was unusual in the still-segregated Washington of the 1920s. “Before my Window” by Rachmaninoff, “O Del Mio Dulce Ardor” (Gluck) and “Joshua Fit the Battle of Jericho,” were among the pieces Miss Anderson sang. “Schubert’s ‘Wohin’ was especially good,” the Preston News reporter wrote.

That Miss Anderson appeared at First Congregational was no accident. The church had an abolitionist tradition and had over its past included African-American members, also rare in Washington, with church leadership helping to found Howard University. Coolidge’s minister, the minister at the time of Miss Anderson’s recital, was Jason Noble Pierce, described in this post at one of our favorite Coolidge sites, crackerpilgrim.com.

Civil rights were a concern of Dr. Pierce’s; indeed, within weeks of the Anderson appearance, Pierce preached in support of a then-controversial intermarriage, that of the already-legendary composer Irving Berlin (Jewish) to Ellin MacKay, the daughter of an Irishman with a silver fortune (“Coolidge’s Pastor Jabs at MacKay,” Jan. 11, 1926,Rockford Republic).

What about the Coolidges? What more about the church? Please share your knowledge.