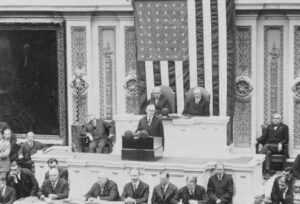 On January 12, for the final time, President Barack Obama will address a joint session of Congress and the American people on the State of the Union. This report on the health of our nation is actually mandated by Article II, Section 3 of the U.S. Constitution: “He shall from time to time give to the Congress information of the state of the union, and recommend to their consideration such measures as he shall judge necessary and expedient.” From the founding of the United States through the William Howard Taft Administration this message was delivered in writing to Congress, but in 1913 President Woodrow Wilson, citing his desire for a more active, visible presidency, delivered the address in person to Congress.

The tradition of the State of the Union speech was only firmly established with Franklin Roosevelt, but President Coolidge never failed in his constitutional obligation to report to Congress on the State of the Union. Coolidge delivered his first and only in-person State of the Union address on December 6, 1923. This was his first address to a joint session of Congress since ascending to the presidency in the wake of President Harding’s death, and Coolidge led with remarks praising President Harding for his service to our country. He then went on to outline his policy agenda for the country, as our good friend Jerry Wallace notes in his book Calvin Coolidge: Our First Radio President: “entry into the World Court, tax reduction, assistance to disabled soldiers, limitations on immigration, opposition to the soldiers’ bonus, civil service reform, waterways development, and new cabinet offices of education and welfare. Concerning League of Nation membership, he announced that the issue was closed.”

Jerry’s book also notes the importance of Coolidge’s speech to his reelection prospects in 1924. As he notes: “The reaction to the speech itself was quite positive–just what the president and his friends desired–although there were, of course, the usual Democratic complaints. Chauncey M. Depew, a Republican Party elder, who had helped nominate Lincoln, heard some railroad men discussing the speech and saying: “We understood every word of it and it is all right. We’ve got a leader for President.”  Two days afterwards, a confident and assured Coolidge would announce his candidacy for the Republican presidential nomination before newsmen at the Gridiron Club dinner. By mid-month, William Howard Taft was writing, “It looks now as if Coolidge were going to be nominated without much real opposition.” In June 1924, at the Republican Convention in Cleveland, that high honor came to him, and in November of that year, his presidency was confirmed overwhelmingly by the vote of the people.”

You can read the entire speech over at our website! You can also access an electronic version of Jerry’s book Calvin Coolidge: Our First Radio President on our website.