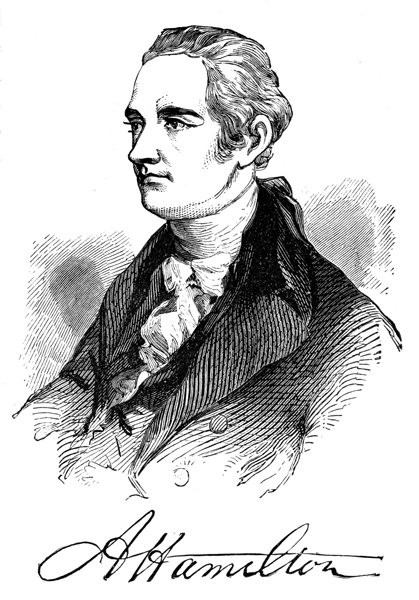 Alexander Hamilton, one of our nation’s prominent Founding Fathers who served as the first Secretary of the Treasury under President George Washington, was a hero to many political leaders. This was especially true for those who served during the 1920s. As a close adviser to President Washington, Hamilton was the “chief architect” of the administration’s policies.[1] It is said that Hamilton is the “Father of American Capitalism,” and, as historian Forrest McDonald wrote, his fiscal policies “breathed life into the Constitution.”[2] President Calvin Coolidge, who was influenced deeply by the American Founding, was influenced by Hamilton’s political and economic thought.

Hamilton’s influence on policy leaders during the 1920s and even into the 1930s can be seen clearly through the many speeches and references made to him by individuals such as Presidents Warren G. Harding, Coolidge, and Herbert Hoover, Secretary of the Treasury Andrew Mellon,  and Senator Arthur Vandenberg. Early in his political career President Harding gave a popular lecture on Hamilton to various audiences, while Senator Vandenberg wrote a book on Hamilton, The Greatest American. Andrew Mellon, whom many consider to be the best Treasury Secretary since Alexander Hamilton, praised him in his book Taxation: The People’s Business.

Coolidge also joined in the admiration for Hamilton. In a 1922 speech before the Hamilton Club, then-Vice President Coolidge stated that “when America ceases to remember his greatness, America will be no longer great.”[3] Coolidge reflected on Hamilton’s role during the formation and debate over the proposed Constitution which emerged from the Philadelphia convention of 1787. He praised Hamilton’s defense of the Constitution with his “masterly” contributions to The Federalist.[4] Coolidge described Hamilton’s important role in securing the ratification of the Constitution when he stated:

Coolidge argued that Hamilton “played a leading part in the framing of the Constitution,” and without his leadership “the American nation would not have come into being.”[6]

In addition to his role in securing the ratification of the Constitution, Coolidge argued that another aspect of Hamilton’s genius was his economic program, which was the foundation for the success of American capitalism. Treasury Secretary Hamilton was confronted with serious economic problems and “his tremendous task was to provide for funding the national debt, establish the public credit, and provide for the government revenue.”[7] Some of Hamilton’s initiatives that Coolidge specifically found crucial to the American economy included the establishment of the First Bank of the United States and his Report on Manufactures, which Coolidge contended was “a great contribution to political economy.”[8]

Coolidge argued that Hamilton’s Report on Manufactures developed a sound doctrine that would create a strong and diverse American economy. As Coolidge stated:

He believed in protection [tariffs] in the first place as a means of national defense. He desired his country to be self-sustaining and self-sufficient…After national defense he advocated protection as the method by which the nation would increase its power to produce wealth.

The party now in power in this country, through its present declaration of principles, through the traditions which inherited from its predecessors, the Federalists and the Whigs, through their achievements and through its own, is representative of those policies which were adopted under the lead of Alexander Hamilton.[9]

The political economy of Hamilton focused on a commitment to a limited government, sound money (the Gold Standard), low levels of taxation and regulation, and economic protectionism. These were the economic principles that were at the core of the Harding-Coolidge economic program.

In fact in 1922 the nation was still recovering from a severe economic downturn and Coolidge stated that “it is the policy of the Republican Party, in so far as it can influence conditions, to reestablish fiscal stability.”[10] Coolidge told the nation in his remarks honoring Hamilton that “there is no such thing as the general welfare of the people in a period of business depression.”[11] For Coolidge the “application of the theory of Hamilton to present conditions” was necessary to restore the economy in the aftermath of the Great War and this was exactly the policy that Harding and Coolidge followed to precipitate the Roaring Twenties.[12]

In other words Coolidge argued that the principles of the Founding were not obsolete, but could be applied to current policy problems. Specifically, in regard to Hamilton, Coolidge argued that “the government have and use the power necessary for the economic welfare of the country.”[13] Coolidge was not asking for a blank check of unrestricted use of power as President Woodrow Wilson had done, but as he explained in regard to business regulation:

Coolidge argued that “the measure of the strength and the enlightenment of a people is the measure of their appreciation of their great men, their devotion to their memory and the defense of the institutions which they have established.”[15] He also warned that “when the reverence of the nation for its great men dies, the glory of the nation will die with it.”[16] Coolidge, just as the Founding Fathers, understood that the morality of the people was even more important than a strong economy to preserve the republic. In closing his speech to the Hamilton Club he stated:

All the elaborate functions of the government will be of no avail, unless there abide in the people the simple, homely virtues of industry and thrift, honesty and charity. Without these characteristics there can be no advance in the general effectiveness of the government or the general welfare of the people…There can be no national greatness which does not rest upon the personal integrity of the people.[17]

[3] Calvin Coolidge, “Our Heritage from Hamilton,” Address on the Anniversary of the Birthday of Alexander Hamilton, Before the Hamilton Club, at Chicago,” January 11, 1922, in The Price of Freedom: Speeches and Addresses by Calvin Coolidge, Charles Scribner’s Sons, New York, 1924, p. 101.