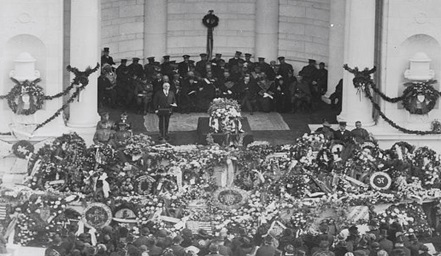 President Warren G. Harding speaking at the burial of the Unknown Soldier.

On the platform with him are Mrs. Harding and Vice President and Mrs. Calvin Coolidge.

“We are met today to pay the impersonal tribute. The name of him whose body lies before us took flight with his imperishable soul. We know not whence he came, but only that his death marks him with the everlasting glory of an American dying for his country.”  –Warren G. Harding, Address at Arlington Cemetery, Armistice Day, 1921

Among our nation’s outstanding memorials is the Tomb of the Unknown Soldier at Arlington National Cemetery. This November 11th will mark the centennial of the burial in 1921 of the Unknown from the Great War. On that day, speaking from the marble amphitheater, President Warren G. Harding gave a moving, well-received address honoring the Unknown, along with all his cohorts who had died battling for democracy and an end to war. The ceremony in all its parts was very poignant and impressive. In a way, for many Americans, the burial of the Unknown marked the finale of the Great War. Now life could move on. Symbolic of this, as the President spoke, the U.S. Mint was striking a new silver dollar to mark the dawn of peace and a new era.

Numerous articles will be written to commemorate this centennial. But few, if any, will mention one of the most unusual, important, and historic features of the burial ceremony: the sound transmission of the event—that is, the prayers, speeches, tributes, music, gun salutes, and taps—by long distance telephone circuits to audiences of many thousands gathered on the East Coast in New York City and on the West Coast in San Francisco, 2,565 miles apart as the crow flies. Moreover, this new technology made it possible for the first time for the words of the President of the United States spoken to an audience in one venue to be heard simultaneously in others. This was an initial step towards making presidential addresses a national event heard by millions.

The American Telephone and Telegraph Company (AT&T) made possible this transmission over its Bell Telephone System, doing so as a public service and to demonstrate its new sound technology. The process involved was complex and demanded careful planning and execution.

The Bell System’s public-address system was used to capture and amplify the spoken word or music or other sounds. It offered two options as to what was done with the sounds. The basic option was to amplify the words of a speaker or the songs of a singer, captured by microphone, and then send them out over loudspeakers to the audience. The second option allowed the sound to also be sent out over long distant telephone circuits to another site, where it was amplified and dispersed through loudspeakers to listeners in large auditoriums or perhaps in a park or field.

This public-address system had been first used in April of 1919 when speeches made in Washington (including one by Franklin D. Roosevelt, then Assistant Secretary of the Navy) were heard in New York City by a large crowd at a Fifth Liberty Loan rally. This same amplification system, with no outside transmission, had also been used successfully at the Republican National Convention in June of 1920 and again at Harding’s inauguration in March of 1921. In the case of the latter, consideration was given by the inaugural committee to sending the proceedings of the inaugural ceremony to certain cities around the country, but the idea was later dropped.

This time at Arlington, however, the public-address system was linked to the Bell System’s long-distance lines. Three transcontinental circuits were used: one to carry the sound transmission; another to serve as a backup if the main circuit failed; and a third to send out telegraphic instructions to employees at 15 repeater stations along the route and to monitor the quality of the transmission.

The two sites chosen to receive the transmission of the burial service were New York City’s Madison Square Garden and San Francisco’s Civic Auditorium. In both cities, elaborate local ceremonies were held in conjunction with listening to those at Arlington. Loudspeakers were placed both inside and outside of the buildings to accommodate the vast crowds present—an estimated 60,000 in New York City and 20,000 in San Francisco. To make sense of it all, there was a program announcer to keep listeners appraised of what was taking place. The transmission and amplification went perfectly, coming through with “precision and distinctness.” Never had so many heard the voice of a single individual simultaneously. The attendees, many of whom had lost loved ones in the War, were deeply moved, and thankful that they had been able to listen to and participate in the ceremony staged in Arlington. Many said that it seemed “as if their President was talking to them alone.”

President Harding was both pleased and impressed. He afterwards wrote to Harry B. Thayer, President of AT&T, the following:

“I have not been quite able to realize even yet the marvel of having spoken on this occasion to vast audiences in New York and San Francisco as well as to the great concourse which was before me. The wonder of it has been magnified in my own mind by the reports which have come from those cities describing the attitude of the people; of how they followed the exercises in every detail, even joining in the singing and in the words of prayer at the conclusion of the address.”

This transmission of sound did not involve broadcast radio at all. It was a point-to-point transmission of sound using Bell’s long-distance telephone circuits. Yet, this technique would soon be used in establishing national radio hook-ups among individual radio stations, such as between AT&T’s WCAP in Washington and its WEAF in New York and would make possible in a few years the development of network programming, including presidential addresses of which President Calvin Coolidge would make over 60 during his years in office. 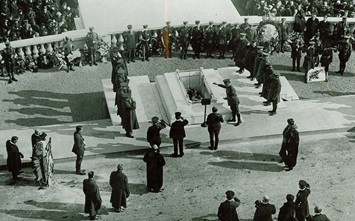 Final Rites:  The Burial of the Unknown Soldier.

Note the microphone before the Tomb.

“We therefore commit this body to the ground, earth to earth, ashes to ashes, dust to dust; in sure and certain hope of the Resurrection to eternal life.” 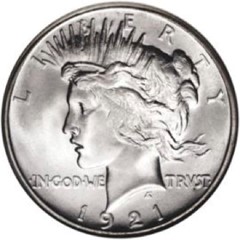 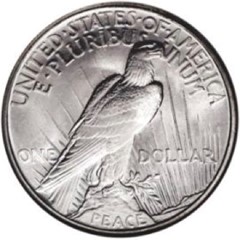 The Dawn of a New Era of Peace and Prosperity awaits the Nation.