In 1918, while Calvin Coolidge was Lieutenant Governor of Massachusetts, the outbreak of Spanish Influenza hit the United States and wreaked havoc across the nation. Massachusetts was hit hard. By late September of that year, there had been an estimated 50,000 cases of flu in the Bay State. Within two weeks, 850 Bostonians had died. Around the height of the outbreak, over 2,000 new cases of flu were reported in a single day. At the Army’s Camp Devens, one out of four men contracted influenza. Alexander Graham Bell reported in a personal letter that 100 cases of influenza and two deaths had struck pupils at the Clarke School for the Deaf in Northampton, where Grace Coolidge had earlier trained as a teacher.

Alexander Graham Bell reporting in a private letter on the influenza outbreak at Grace Coolidge’s favorite institution: the Clarke School for the Deaf. (Image courtesy of the Library of Congress)

Hospitals were crammed to the max, but a shortage of doctors and nurses proved even more problematic. Tapped by the governor to solicit help, Coolidge sent a telegram appealing to governors of nearby states that were less impacted by the outbreak, as well as to President Wilson. Coolidge especially urged neighboring states to send nurses and doctors.

Massachusetts urgently in need of additional doctors and nurses to check growing epidemic of influenza. Our doctors and nurses are being thoroughly mobilized and worked to the limit. Many cases can receive no attention whatever. Hospitals are full, but arrangements can be made for outside facilities. Earnestly solicit your influence in obtaining for us this needed assistance in any way you can.

Closures of public spaces, just as we are seeing today, were common in 1918. Movie theaters, dance-halls, and “other unnecessary places of public assembly” were ordered to close in and around Boston. Many churches and schools were also closed until the epidemic had passed. 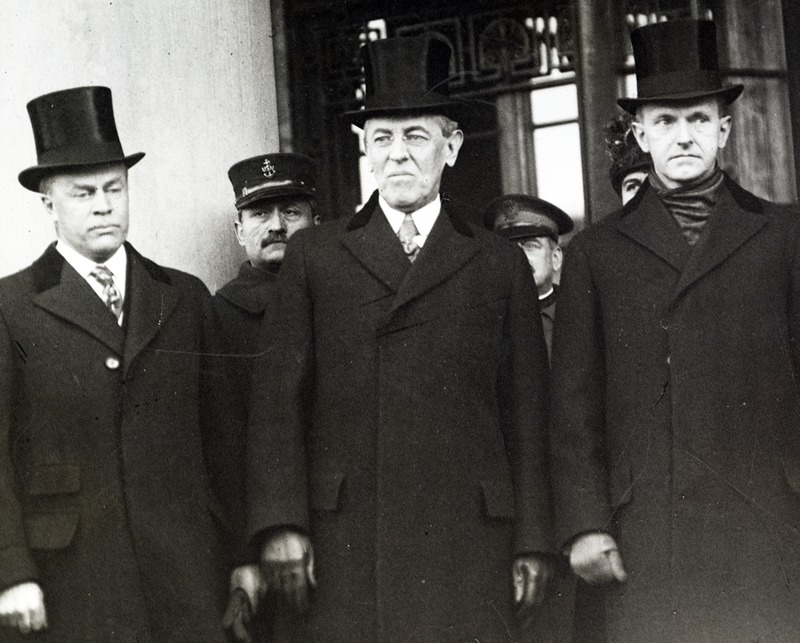 Pictured above, left to right: Boston Mayor Andrew Peters, United States President Woodrow Wilson, and Massachusetts Governor Calvin Coolidge in late 1919. Though photographed after the worst of the epidemic had passed, these men were some of the central political figures at the center of fighting the outbreak. (Image courtesy of the Forbes Library in Northampton, MA)

And the flu did pass. The toll was significant, but the Coolidge stories of this period remind us of both of the nation’s fortitude during the epidemic, and the fact that the epidemic eventually ended. Alexander Graham Bell reported that by December of 1918, the Clarke School pupils “had a clean bill of health,” and that no cases of flu had “appeared for a long time.” Coolidge’s son, John, trained as a marksman at Camp Devens just a few years later. Individuals returned to work, life returned to normal, and the Coolidge story was still just getting started.