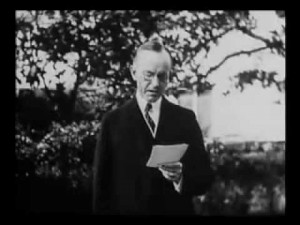 “You lose.” These words, the punch line of one of the most famous anecdotes about President Coolidge, are often trotted out as evidence that our thirtieth president should be remembered for nothing more than how little he both said and did. This is a pity, for while “Silent Cal” certainly was terse and to-the-point, mostly eschewing small talk and idle remarks, it is clear from the treasure trove of speeches Coolidge wrote that he could be counted on to deliver stirring, important remarks when called upon to do so.

This has become clearer to me in recent weeks in a number of ways. Listening to home school students recite the President’s words in our Have Faith in Massachusetts speech competition was one. I’d read the speech before, but it wasn’t until I heard the words coming from those teenagers that I realized just how eloquent and striking President Coolidge could be in his writing. “Men do not make laws. They do but discover them,” the President said, as he began his term as Massachusetts Senate President. “Government cannot relieve from toil. It can provide no substitute for the rewards of service,” he continued. “Don’t expect to build up the weak by pulling down the strong. Don’t hurry to legislate. Give administration a chance to catch up with legislation.”[i] I find myself wanting to shout “hooray!”

Coolidge’s speeches cover a vast array of subjects, as one would expect. Everything from addresses to civic societies and State of the Union messages to his off-the-cuff remarks given from the back of a railway car in “Vermont is a State I Love,” Coolidge’s speeches paint a vivid picture of the man whose vision of politics towers over the 1920s. If you want to know why President Coolidge made tax cuts a central priority of his administration, you need only look to a speech like his remarks delivered to the Meeting of the Business Organization of the Government in Memorial Continental Hall on June 30, 1924:

“…any oppression laid upon the people by excessive taxation, any disregard of their right to hold and enjoy the property which they have rightfully acquired, would be fatal to freedom. A government which lays taxes on the people not required by urgent public necessity and sound public policy is not a protector of liberty, but an instrument of tyranny. It condemns the citizen to servitude. One of the first signs of the breaking down of free government is a disregard by the taxing power of the right of the people to their own property. It makes little difference whether such a condition is brought about through the will of a dictator, through the power of a military force, or through the pressure of an organized minority. The result is the same. Unless the people can enjoy that reasonable security in the possession of their property, which is guaranteed by the Constitution, against unreasonable taxation, freedom is at an end.”[ii]

It’s no wonder President Coolidge has been termed “The Greatest Conservative President in American History.” Coolidge placed economic liberty and limited government at the heart of his policy program. He firmly believed that excessive government interference in the marketplace was an obstacle to prosperity and growth. He worked assiduously with his Treasury Secretary Andrew Mellon and his Budget Bureau Director Herbert Lord to reduce the size of the national government and lower the confiscatory rates of taxation that had endured during the Great War years. As Coolidge noted in his 1925 inaugural address:

The quotes above are merely a sample of the almost unending store of gems that are contained within the President’s speeches. I encourage all those interested in Coolidge to peruse the website of the Calvin Coolidge Presidential Foundation to become better acquainted with his orations. President Coolidge had a definite vision of the role of representative government and man’s relationship with the state. His speeches, more than any interpretations that come through scholarship and works of biography, elucidate that vision most clearly. There is no better source than Coolidge’s own words.

One Response to “To Know Coolidge You Must Read Coolidge”