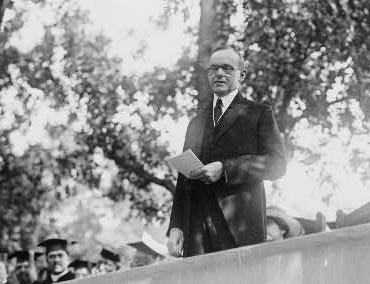 As the centennial of Calvin Coolidge’s 1923 inauguration draws near, the Calvin Coolidge Presidential Foundation is offering a special incentive to challenge high school students in the six New England states to declaim on video an excerpt from one of President Coolidge’s speeches.

Students, Step Up to the Challenge!

To accept the challenge, first read through the speech excerpts in the official 2022 Coolidge Cup Online Declamation Speech Packet. Then choose the one speech excerpt that you like the best, and familiarize yourself with it. Record yourself on video delivering the speech and submit it to our Coolidge Cup Declamation Qualifier by the deadline of April 16, 2022 at 11:59pm ET.

The Coolidge speeches from which the excerpts in the packet are drawn are:

The New England Challenge is open to all high school students (grades 9-12) in the states of Vermont, New Hampshire, Maine, Massachusetts, Connecticut, and Rhode Island.

Every high schooler from Vermont, New Hampshire, Maine, Massachusetts, Connecticut, and Rhode Island who submits a well-prepared entry to the Coolidge Cup Online Declamation will receive a $25 award, and will be entered to win an expenses-paid trip to compete in declamation at the 2022 Coolidge Cup in Plymouth, Vermont, in July 2022.

As a bonus incentive for educators, we are also offering a $100 gift card for school supplies to all New England teachers and speech/debate coaches who get at least three of their students to enter the New England Challenge.

Each of the entries will be judged by the Coolidge Foundation, and the top entries from each state will receive a special prize.

Additionally, the top 8 finishers overall in this competition will receive an invitation to travel to the 2022 Coolidge Cup, expenses paid, to compete in the declamation event at the President Calvin Coolidge State Historic Site in Plymouth, Vermont. The dates for the 2022 Coolidge Cup are July 2-4, 2022.

With President Coolidge having been born, raised, and educated in the Green Mountain State, you can understand that Vermont students are particularly special to us. A special prize recognizing the top entries from Vermont students will be offered. Details will be announced in the spring.

If you are ready to take the New England Challenge, follow the instructions here to submit your entry to the Coolidge Cup Qualifier for Declamation.

For questions or inquiries, write to Speech and Debate Director Jared Rhoads (jrhoads@coolidgefoundation.org).