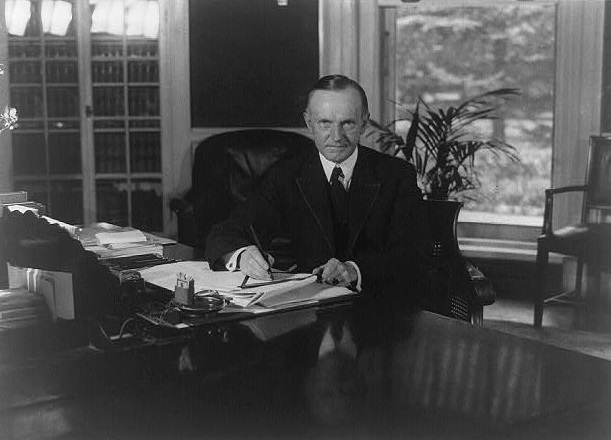 “The individual has rights, but only the citizen has the power to protect rights. And the protection of rights is righteous.” – President Calvin Coolidge

Prompt: Imagine that you are President of the United States. Pick one issue today where you believe America’s founding principles guaranteeing equal rights for all citizens are not being fully realized. Write a speech you would deliver as president urging Americans to correct the injustice. Presidents are often inspired and informed by the ideals and accomplishments of previous Chief Executives. In your speech, you must use examples from President Calvin Coolidge’s life and beliefs. Research can be found on this page. Your speech must be 800 words or fewer. The submission form is at the bottom of this page. The first place submission will receive $1,500 and the runner up will receive $500.

Background: America’s founding documents recognize that all individuals possess certain inalienable rights. The U.S. Constitution establishes a system of government designed to protect these rights for its citizens. It is important to realize that citizens’ rights do not come from the government, but rather are protected by the government. The first 10 amendments to the Constitution, known as the Bill of Rights, as well as, additional amendments and numerous laws seek to ensure individual rights are upheld. It is important that the law not discriminate against certain individuals or groups, but rather treat all citizens equally. In instances when rights’ protections are not being applied equally among citizens, there is said to be a civil rights abuse.

President Coolidge understood the importance of citizens’ rights and did much to secure the rights of those whom he believed were not having their rights upheld. His respect for all individuals’ rights led him to reach out publicly to many different groups that were experiencing prejudice during his political career. For example, he gave the commencement speech at historically black Howard University, spoke at the dedication of the Jewish Community Center in Washington D.C., addressed the (Catholic) Holy Name Society, signed the Indian Citizenship Act, and supported the right of an African American candidate to run for political office by confronting those who would deny the candidate that right. Coolidge once said, “If ever the citizen comes to feel that our government does not protect him in the free and equal assertion of his rights at home and abroad, he will withdraw his allegiance from that government, as he ought to, and bestow it on some more worthy object.”

Opening the Door to Hope: Coolidge and Civil Rights a video lecture by Rushad Thomas

Every Native America a Citizen

The United States Bill of Rights from the U.S. Government Publishing Office

About the Calvin Prize for Vermont Youth: The Calvin Prize for Vermont Youth is a prize named after President Calvin Coolidge and his son, Calvin Coolidge, Jr. It is for writers ages 13 to 19 currently living or attending school in the state of Vermont. The first-place prize of $1,500 and the runner-up prize of $500 are awarded for submission that best addresses the prompt of this year’s prize. The winners will be invited to attend and be honored at the Coolidge Foundation’s annual summer gala in Plymouth Notch, VT in early July 2018. The Coolidge Foundation is grateful to the Young Writers Project for its partnership in the Calvin Prize contest.

Please download, complete, and upload this media release form along with your submission: https://coolidgefoundation.org/wp-content/uploads/2017/11/Media-Release-Form.pdf