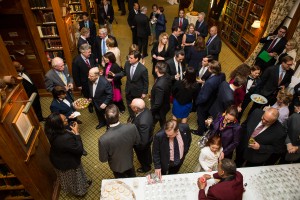 The event, which took place at the Union League Club of New York, was held to kick off the Foundation’s expanded lecture and event series. The celebration featured remarks by special guests James Grant, editor of Grant’s Interest Rate Observer, and Steve Forbes, Chairman and Editor-In Chief, Forbes Media. Mary Carter also performed Cole Porter’s classic tune, “You’re the Top.” The evening included a birthday cake for the Coolidge Coin and a small display of Coolidge-era coins and currency, prepared by Mark Anderson of the New York Numismatic Club. The event was sponsored by the Lehrman Institute and Marketfield Asset Management.

Matthew Denhart, executive director of the Foundation, said, “President Coolidge maintained a special focus on economic and monetary policy during his years as President. The Coolidge Foundation is therefore thrilled to be in New York to celebrate the release of this wonderful Coolidge Presidential $1 Coin from the U.S. Mint.”

“This is just the beginning for Americans getting to know Coolidge,” said Amity Shlaes, Coolidge Foundation chairman and CEO. “Coolidge’s fans are growing in number, and we’re pleased to see them here and at our debates this summer at Coolidge’s birthplace in Plymouth Notch.”

President Calvin Coolidge is best remembered as a champion of fiscal responsibility who balanced the Nation’s budget and reduced the top marginal tax rate to 25 percent.

Projects undertaken by the Foundation, based at Coolidge’s birthplace in Plymouth Notch, Vt., include high school economic debate, a national speaker and event series, publishing and scholarship on President Coolidge and his values.

You can find the full video of the event on the Coolidge Foundation YouTube Channel by clicking here.

A wealth of pictures from the event can also be found by visiting the Foundation’s Facebook page and Flickr page.

One Response to “Celebrating the Coolidge Dollar in New York City”

Before Jackie O, There was Grace Coolidge

Jackie Kennedy has long been renowned for her laudable fashion sense and regal stature. During JFK’s presidency she sparkled on the national stage. Yet there was another first lady who was the Jackie of her time. At Plymouth Notch she is the Queen of all our hearts: Grace Anna Goodhue Coolidge. Wife, mother, and First Lady of the United States, Grace warmed the hearts of all who knew her. She provided the family space and social grace that allowed her husband Calvin to succeed in the White House. The American people recognized what a gem they had in her, and we continue to celebrate the life of this great woman.

Modern American Conservatism: A Spirited Conversation at the Hoover Institution

It can be said with a high degree of certainty that Calvin Coolidge and Herbert Hooverdid not have the warmest of relationships. As the trailblazing Secretary of Commerce Hoover campaigned for industry standardization and greatly increased the influence and power of the sleepy backwater Commerce Department. Coolidge never thought highly of Hoover’s activist sentiments, referring to him as “wonderboy.” Nonetheless, Coolidge supported Hoover in both 1928 and 1932, giving his last public speech in the run-up to the 1932 presidential election in Hoover’s favor.

Could America ever find a leader who might cut our debt? There’s reason for hope. We at least have a model from history. There was once a president who stared down big government and won the battle for control of the debt. That president was Calvin Coolidge.

The Calvin Coolidge Presidential Foundation is pleased to announce that Dr. Donald Boudreaux of George Mason University is the winner of the 2014 Coolidge Prize for Journalism, a $20,000 journalism prize awarded to the author whose short works best embody the spirit and values of our nation’s thirtieth president. Dr. Boudreaux, a prominent libertarian economist, author, and professor, is published in the Wall Street Journal, Investor’s Business Daily, Regulation, Reason, Ideas on Liberty, the Washington Times, the Journal of Commerce, the Cato Journal, and several scholarly journals such as the Supreme Court Economic Review, Southern Economic Journal, Antitrust Bulletin, and Journal of Money, Credit, and Banking.