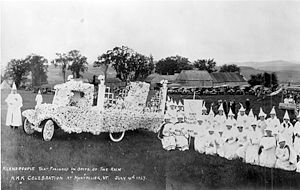 The Klan is anti-black, anti-Catholic and anti-Semitic. It offers a broad program aimed at “uniting native born white Christians for concerted action in the preservation of American institutions and supremacy of the white race.” At its height, it has 4 million members. “Harding and Coolidge, presidents generally considered conservative, had much better records on the issue than the progressive Woodrow Wilson.” His “Toleration and Liberalism” speech of 1924 in Omaha, Nebraska was a very strong statement on the subject.