Which school did Calvin Coolidge attend?

Both of the photographs say Calvin Coolidge attended that school but only one is right!

The original one-room stone school at Plymouth Notch was built in the 1840’s. Calvin Coolidge went here up until Eighth Grade. The mica schist stone was quarried just over the knoll (you can see remnants of that quarry as you go up through the Notch (on your left as you head toward the village). In 1890, about the time Calvin was entering Amherst College, the stone school was taken down and replaced by the clapboard school that you see today at Plymouth Notch. Look at the foundation and you can see stones used from the older school. 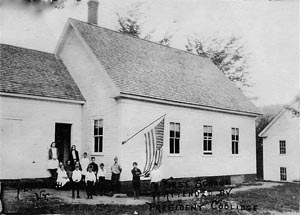 There are a few items, photographs and even one of the 1920’s souvenir Staffordshire plates, which incorrectly identify the wooden school as the one Cal attended, causing this confusion.

At one time, there were 17 schools in the town of Plymouth. This was District School #9 and students went here up until 1956. Now we use it for activities when today’s students visit Plymouth Notch.

Where else did Calvin Coolidge go to school?

After Calvin Coolidge finished Eighth Grade at Plymouth Notch, he went to Black River Academy in Ludlow, 12 miles away. He stayed in Ludlow during the week and came home on most weekends. Then he went to St. Johnsbury Academy for a short time before starting Amherst College in Massachusetts.