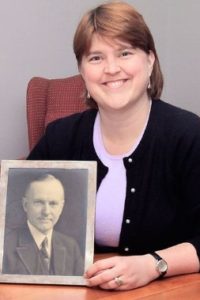 Jennifer Coolidge Harville is the great-granddaughter of President Coolidge and Grace Coolidge. Jennifer speaks frequently to audiences in New Hampshire and Vermont about the Coolidge family. Her talks include background information about Calvin Coolidge, his wife Grace, and Calvin’s rise in politics – locally in Northampton, Massachusetts, at the state level in Boston, Massachusetts, and at the national level. She describes the Coolidge family tree, talks about the Coolidge’s two sons, and shares how the early death of Calvin, Jr., left her grandfather, John, as the sole Coolidge descendant.

Ms. Harville lives in Westmoreland, New Hampshire with her husband David, their son Jake, and daughter Sheridan. She is a stay-at-home mother who enjoys volunteering at her church, local school, and for the National First Ladies Day Commission. One of her passions is choral singing, and she is a member of the Brattleboro Concert Choir in Brattleboro, Vermont. She is a graduate of Gettysburg College and earned a master’s degree from Emory University.