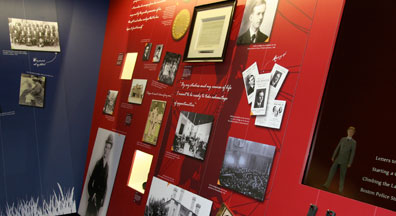 The Permanent Exhibition, More than Two Words: Calvin Coolidge’s Life & Legacy, is featured in the Pinney Room of the President Calvin Coolidge Museum and Education Center. This interactive exhibit offers a graphic insight into the boy from Plymouth Notch who became President of the United States. The exhibit appeals to visitors of all ages, providing an intimate look at Mr. Coolidge, and uses digital technology to reveal his noble character and timeless values.

Calvin Coolidge is brought to life through objects, photographs, newsreels, personal correspondence, political cartoons and the masterful work of Jim Cooke, the re-enactor acclaimed for his insightful portrayal of President Coolidge.

Such an exhibit space was conceived by John Coolidge, the son of the President, former Vermont Governor Deane C. Davis, Dartmouth Librarian Edward Connery Lathem, Chairman of the Vermont Historic Sites Commission Vrest Orton, and others when they formed The Calvin Coolidge Memorial Foundation in 1960. 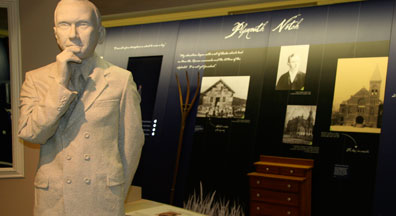 What they envisioned was a museum facility that would help those interested in our Thirtieth President to understand the history and culture of his world. The museum was to focus not only on Coolidge, the man and his deeds, but also on the exciting age of which he was part. To sum up, the facility was to serve, as Mr. Lathem put it, “as a living memorial and a multi-faceted educational enterprise of national orientation and consequence.”

William B. Pinney, director of the Vermont Board of Historic Sites in 1972 stated:

“A Memorial to Calvin Coolidge cannot alone be a building, but also must be preservation of a way of life.  … Plymouth’s importance as a Historic Site cannot be overstated. It represents not only the preservation of the home of a President, but the entire surroundings that shaped his life and those of his ancestors before him. It combines his birthplace, his home, the home of his family, and the place for his inauguration, all in the untouched beauty of a Vermont village. ”

The Exhibit is a result of a collaborative effort between the Calvin Coolidge Memorial Foundation and the Vermont Division for Historic Preservation. It was designed by Media-FX and Group DES of Montreal, a team internationally recognized for its innovative interpretive museum displays.