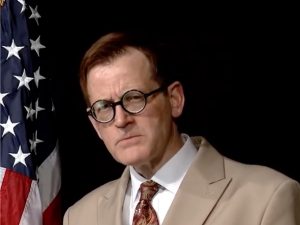 Tracy Messer serves as Coolidge Ambassador and Office Administrator, based at the Foundation’s headquarters in Plymouth Notch, Vermont.

Following in the footsteps of his living history mentor Jim Cooke, Mr. Messer made his debut performance as “Calvin Coolidge” in 2017 and has since been traveling throughout New England and beyond giving original first-person presentations as the thirtieth President. Mr. Coolidge serves as a personal and professional role model to Mr. Messer on and off stage.

Before joining the Coolidge Foundation, Mr. Messer worked in the Monadnock region of New Hampshire within the high-tech and healthcare sectors as an accredited member of the Public Relations Society of America. He is a 1994 graduate of Leadership New Hampshire and has served on the boards of a number of historical and public relations organizations. Throughout his career, Mr. Messer has shared his love for local history through written and spoken words. In addition to his lifelong interest in Calvin Coolidge, he has produced a film about the largest forest fire in the state of New Hampshire and has developed a mobile app walking tour for the Town of Peterborough, NH.

Mr. Messer earned his master’s degree in Counseling from Colgate University and his bachelor’s degree from Dickinson College where he double-majored in Psychology and Spanish, having graduated with honors.

Mr. Messer may be reached by email at: tmesser@coolidgefoundation.org.