On Friday, November 11th Foundation program associate Rushad Thomas interviewed Melanie Kirkpatrick, author of the new book Thanksgiving: The Holiday at the Heart of the American Experience. In the interview Kirkpatrick touched upon the themes of her fascinating book, which offers an opportunity for all to reflect on the meaning of the Thanksgiving holiday and its place in American society and culture. 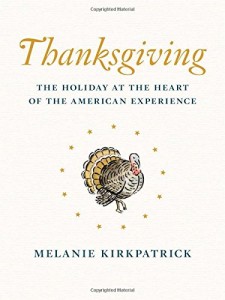 Kirkpatrick wrote her book to help enrich our understanding of Thanksgiving. Amid all the talk of football, turkey, and holiday shopping, it’s important to understand the myriad of ways in which Thanksgiving has enriched our lives over 400 years. Thanksgiving is often associated simply with neighborliness between people, but as Kirkpatrick shows, the holiday goes much deeper than that. Thanksgiving’s roots lie in our country’s Judeo-Christian heritage. The idea of calling for days of Thanksgiving comes right out of the Bible, and the Christian Church has admonished its followers to give thanks on specific occasions for specific blessings from time immemorial. That tradition came with the Pilgrims as they crossed the Atlantic to settle the New World.

Many of our early leaders continued the Thanksgiving tradition by proclaiming Days of Thanksgiving, all of which were established to give thanks for specific blessings such as rain or recovery of health. In 1639 the Connecticut Colony became the first civil authority to call a “Day of Thanksgiving for ‘general blessings.’” This move was controversial, as many religious leaders believed a general Thanksgiving would weaken the meaning of the gesture. That the holiday has become a day of general thanksgiving would likely disquiet our early forebears.

Yet there are many elements of the modern holiday that would likely warm the hearts of those same forebears. Thanksgiving has long been associated with the warm generosity of the American people. On this day, many churches and civic organizations open their doors to offer meals and comfort to the homeless and hungry.  The American people, already among the most liberal in their charitable contributions, also significantly ramp up their donations during the Thanksgiving season. In fact, the recent phenomenon of “Giving Tuesday,” which began at the 92nd Street YMCA in New York, was established to highlight the connection between gratitude and generosity. Americans are keen to give to important causes as they give thanks for the prosperity they enjoy.

Thanksgiving was an important part of the Coolidge years as well. During their time in the White House, Calvin and Grace received many game animals for their Thanksgiving table, including turkeys, geese, quail, ducks, and rabbits. In 1926, they received game from Mississippi that was described as having a “toothsome flavor.” That gift, a raccoon originally intended for the dinner plate, ended up living in the White House as a pet. Named Rebecca the Raccoon, she quickly became one of the Coolidges’ favorite White House pets.

It is with great sorrow that the Coolidge Foundation reports the passing of longtime Trustee, Thomas F. Cooley. Tom, whom our community knows well from his loyal presence at the […]