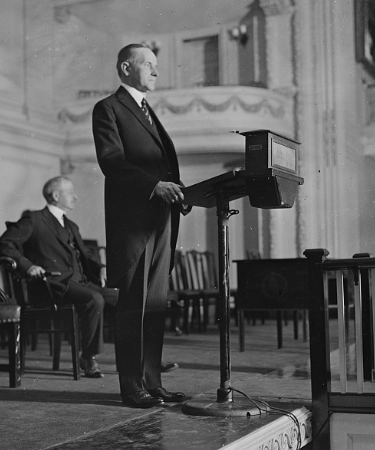 As a high school student at Black River Academy and as a college student at Amherst College, Calvin Coolidge studied rhetoric and participated in debate–and excelled in both. He later said that the experience helped prepare him for his career in law and politics, and instilled in him the importance of civil discourse, public policy, and service.

“Since the dawn of civilization, the triumphs of the tongue have rivaled, if not surpassed, those of the sword.”
– Calvin Coolidge

Our premier tournament each year is the Coolidge Cup, a national tournament that attracts top students in speech and debate from across the country to President Coolidge’s historic hometown of Plymouth, Vermont, to compete for the prestigious Coolidge Cup and scholarship prizes. The tournament takes place each year during the week of the Fourth of July, and the Coolidge Foundation assists with travel expenses and covers all hotel and meal expenses for students.

The Coolidge Foundation also helps to build and grow debate leagues around the country. One league that we run is the Coolidge Debate League at the Luddy Schools, located in the greater Raleigh area in North Carolina. If you would like to bring Coolidge debate to your region, please reach out to us. We are pleased to share our tournament resources with leagues who are looking to do Coolidge debate.