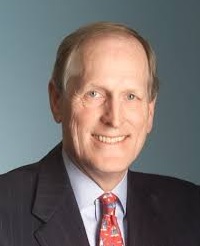 E. David Coolidge, III, vice chairman of William Blair & Company, joined the firm in 1969. Mr. Coolidge, who was CEO from 1995 until January 2004 and also manager of the firm’s Corporate Finance department from 1977-1994, formerly was a director of the Securities Industry Association and served as governor of the National Association of Securities Dealers.

After earning a B.A. from Williams College and an M.B.A. from the Harvard Graduate Business School of Administration, he served in the Peace Corps in Colombia, South America, from 1967-1969. He serves on the boards of Shields Meneley Partners and Duluth Trading Co. Mr. Coolidge is a trustee of both Rush University Medical Center and the University of Chicago. He is also trustee emeritus of Williams College. Over the years Mr. Coolidge has served on many for profit and nonprofit boards including Kmart Corporation, United Stationers, the Better Government Association and Youth Guidance.

Mr. Coolidge is featured in three published business books, “Investment Leadership,” by James Ware, “This Isn’t the Company I Joined,” by Carol Kinsey Goman and “Kellogg on Branding,” edited by Alice M. Tybout and Tim Calkins.