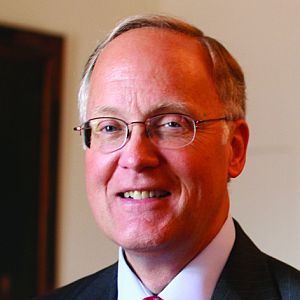 James H. Douglas was elected Governor of Vermont in 2002 and was re-elected in 2004, 2006 and 2008. During his tenure, he focused on strengthening the state’s economy, reducing the cost of living in Vermont and protecting the state’s natural environment. He advanced groundbreaking health reforms and worked to strengthen the relationship between Vermont and Quebec and the other Canadian provinces. While governor, Douglas served as the chairman of the National Governors Association and in February 2010 was appointed by President Obama as co-chair of the Council of Governors.

Douglas was elected to the Vermont House of Representatives after graduating from Middlebury College in 1972. He became Majority Leader in his third term at the age of 25.

The former Governor was elected Secretary of State in 1980, a post he would hold for 12 years. He was elected State Treasurer in 1994. During Douglas’s eight years as Treasurer, Vermont’s bond rating became the best in New England and among the highest in the nation.

Governor Douglas is now an Executive-in-Residence at Middlebury College. He is a Trustee of the Calvin Coolidge Presidential Foundation and serves on the boards of several local companies. He continues as Town Moderator for Middlebury, a post he has held for a quarter-century. The former Governor and his wife, Dorothy, have two sons and two grandsons.