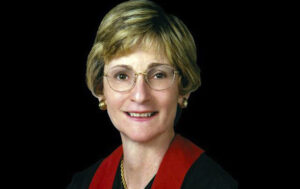 Judge Edith Jones has been a federal judge since May 1985, when she was appointed to the bench by President Ronald Reagan. She assumed the chief judgeship of the Fifth Circuit in January, 2006 and served until October, 2012.

Born in Philadelphia, Pennsylvania, in 1949, she grew up in San Antonio, Texas, graduating from Alamo Heights High School, where she was a National Merit Scholar. In 1971, she received her B.A. in Economics from Cornell University, graduating with honors. In 1974, she was awarded her J.D. at the University of Texas Law School, where she was a law review editor and received the Order of the Coif. She is a recipient of the Leon Green Award from UT Law Review, and in 2004 was honored with the Distinguished Alumnus Award. Active in the Boy Scouts of America organization for many years, Judge Jones is on the board of the Sam Houston Area Council, and received Scouting’s Silver Beaver Award in 2003. She has been a member of the Garland Walker Inn of Court in Houston since 1998 and is its current President.

From 2002 to 2008, Judge Jones served as a White House Fellows Commissioner, by appointment of President George W. Bush. She is a former member of the National Bankruptcy Review Commission (1994-97).