John and Florence Coolidge, having had the Homestead deeded over to them by Grace Goodhue Coolidge, presented this magnificent gift as well as all the furnishings, down to a small pin cushion on the bedroom bureau, that were in the house in 1923, to the State of Vermont. Through the professional assistance of Payson R. Webber, A.I.A., in Rutland, VT, there was an access arrangement to all the rooms of the first floor of the Coolidge Homestead. By utilizing halls and corridors and glass partitions in front of doors, we were able to show the public each room of this simple Vermont house and to show each exactly as the way it looked on the night of August 3, 1923.” Vrest Orton, Calvin Coolidge’s Unique Vermont Inauguration, 1960.

Mr. Coolidge’s home, now owned by the State of Vermont and restored and operated by the Vermont Historic Sites Commission with Vrest Orton its chair, is opened for public viewing. John Coolidge, Governor of Vermont Joseph B. Johnson, Lieutenant Governor of Vermont Robert T. Stafford, former U.S. Senator for Vermont Ralph E. Flanders, representatives of the governors of Massachusetts, Rhode Island, Connecticut, New Hampshire, and Mr. Orton are in attendance. H. Meade Alcorn, then-chairman of the Republican National Committee, is the principal speaker at the ceremony. The store and room in which Coolidge was born is privately owned.

An Executive Committee is elected of the officers and Joseph B. Johnson of Springfield, VT, and Payson R. Webber of Rutland, VT. (John Coolidge is added later.) The Corporation adopts By-Laws as required by law.

It is decided that the Foundation shall be kept entirely separate from the State.

Click here to view the Articles of Association and Original Design of Museum Library.

Edward Connery Lathem, author and Dartmouth librarian, outlines the Foundation’s plan for educational initiatives and its role in inspiring study and a deeper appreciation of Calvin Coolidge.  The Foundation encourages, supports, and/or affiliates with authors and publishers that strive to provide an honest picture of Calvin Coolidge and his era.  The Foundation further encourages the reprinting and distribution of Coolidge materials and research.  A Publishing Committee is formed and later a Publications Fund is established to assist scholarly research and publishing.

A partial list of authors (and co-authors, compilers, and editors) in chronological order includes:

Ishbel Ross, Grace Coolidge and Her Era: The Story of a President’s Wife, 1962. The book is reprinted in 1988 with a Foreword by Mary French Rockefeller, and again in 2002 with an Introduction by Jennifer Sayles Harville.

Thomas B. Silver, Coolidge and the Historians, 1982.

Jane and Will Curtis and Frank Lieberman, Return to These Hills: The Vermont Years of Calvin Coolidge, 1984.  Foreword is written by John Coolidge.  The book is reprinted in 1998 with an Introduction by Howard Coffin.

Clifford A. Pease, Jr., MD, Calvin Coolidge and His History: An Annotated Bibliography, 1987

John Earl Haynes, Calvin Coolidge and the Coolidge Era: Essays on the History of the 1920s, 1998.

Examining the Evidence, The Fall Issue of the New England Journal of History, 1998.

Jerry L. Wallace, The Coolidge Presidency: A Chronology—1928, A Tool for Researchers, 2003.

National Notary Association, Why Coolidge Matters: How Civility in Politics Can Bring a Nation Together, 2010.

Straight Talk, The Spring Issue of the New England Journal of History, 2012

The Centennial of Coolidge’s birth is celebrated in Plymouth Notch. The Coolidge Memorial Reception Center and Museum is dedicated.

The sun comes out for the first time in days. The National Guard band is exhilarating and the Centennial starts with literally thousands of interested people attending the formal morning program which is held on the front porch of the post office and general store. Governor Deane C. Davis, Professor Emeritus Allen R. Foley of Dartmouth College, and John Coolidge are speakers. Trustee Consuelo Northrup Bailey is the mistress of ceremonies. Sally Thompson and William B. Pinney receive framed citations from the governor.

A short private service is held at the grave of Calvin Coolidge with the Reverend Nevin Bender officiating. Former Speaker of the House Richard W. Mallary lays the wreath sent by President Nixon as has been done each year on July Fourth.

Postmistress Elaine Sailer opens the post office for a short time and all available commemorative envelopes are cancelled. A new guide to the historic buildings of Plymouth Notch is prepared by the Foundation, designed by Frank H. Teagle, Jr., and published by Robert A. Sharp. The state police estimate the attendance during the day to be 3,500.

A major four-day event is held honoring the 75th anniversary of the Homestead Inaugural under the leadership of Co-Chairs Robert G. Kittner and Mimi Baird.  Two days are a conference at the John F. Kennedy Presidential Library and Museum in Boston, MA, and two days are a re-enactment celebration in Plymouth Notch.

A two-day conference “Calvin Coolidge: Re-examining the Evidence”, held at the John F. Kennedy Presidential Library and Museum in Boston, MA.  Robert G. Kittner and Mimi Baird are Co-chairs. Sheldon Stern, Jim Cooke, and Cynthia D. Bittinger coordinate the academic presentations. The proceedings of the conference are published in The New England Journal of History, Volume 55, No. 1, published in the Fall 1998 edition.

Robert H. Ferrell, Calvin Coolidge: The Man and the Myth

Hendrik Booraem V, Coolidge and the Zen of Politics

Bernice Buresh, Calvin Coolidge and Me

Michael S. Dukakis, From the Legislature to the Corner Office

Sheldon Stern, William Allen White: The Origins of a Stereotype

Allison Lockwood, The Coolidges of Northampton

The 75th anniversary of the Homestead Inaugural celebration is held at Plymouth Notch. Elizabeth G. Masterson oversees a volunteer committee for this two-day event. Huge publicity draws record attendance. Booths are set up for a broad range of activities. On August 1st Malcolm S. “Steve” Forbes and his daughter Moira attend.

Return To These Hills: The Vermont Years of Calvin Coolidge by Jane and Will Curtis and Frank Lieberman, with Foreword written by John Coolidge, is reprinted as a commemorative edition for the 75th anniversary of the Homestead Inaugural of Calvin Coolidge, with support of the Foundation. A new Introduction is written by Howard Coffin.

In the pre-dawn hours of August 3rd the Inaugural reenactment occurs. It is filmed and aired later that morning on the nationally televised Today Show. Luminaries read passages from the Autobiography. More than 100 people come to watch in the middle of the night. The reenactment participants include: 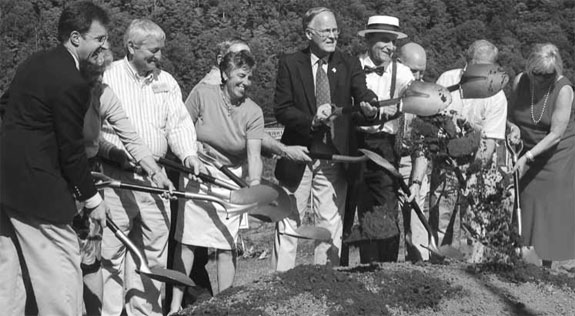 One-third of the building investment costs are funded by the Foundation and two-thirds by the State of Vermont.  The project is a model for a private-public partnership.  In all, Mimi Baird spearheads a capital campaign which raises $3,500,000. The dreams of John Coolidge, Edward Connery Lathem, and countless others for a memorial museum-library for Calvin Coolidge come true after 50 years.

The 50th anniversary Calvin Coolidge Memorial Foundation celebration and the symposium Straight Talk are held at the John F. Kennedy Presidential Library and Museum in Boston, MA.  Barbara S. O’Connell, Vice President, is Chair of the Program Committee, as well as the symposium and Gala Dinner.  Caroline Kennedy is Honorary Chair of the Gala Dinner.

Former President Jimmy Carter and former First Lady Nancy Reagan as Honorary Advisors are acknowledged as are Letters of Congratulation received from former Presidents George Herbert Walker Bush and William J. Clinton.  Jerry L. Wallace is Symposium Consultant and Scholar. A Proclamation is issued by Governor of Vermont James H. Douglas.  C-SPAN broadcasts to a national audience.  The proceedings are to be published in The New England Journal of History.

Gala 50th anniversary dinner keynote speaker is John C. “Jack” Bogle, Founder, The Vanguard Group.  A standing ovation is given by a capacity crowd of over 200.

The budget for the symposium and gala is $85,000.  Mimi Baird, Mr. and Mrs. Robert P. Kirby, the National Notary Association, Northern Trust, Mr. and Mrs. Frank J. O’Connell, the Panson Family Foundation are major sponsors.  The 50th anniversary activities are to break-even, financially. The Coolidge message is communicated clearly.  The education and awareness campaign is highly effective with national newspaper coverage including in the Boston Globe.

The booklet Calvin Coolidge—Twenty Years After, by Claude M. Fuess, originally published in the Proceedings of the American Antiquarian Society (October 1953), Volume 63, pp. 351 – 369, is reprinted by the Calvin Coolidge Memorial Foundation as a commemorative edition for its 50th Anniversary.

An interactive museum exhibit is to unveiled for the Permanent Exhibit Room named after William B. Pinney.  The design is determined by a collaborative Design Committee comprised of Giovanna Peebles, John P. Dumville, William W. Jenney and Mimi Baird.  Mimi Baird was instrumental in encouraging the Vermont Legislature to approve a $250,000 grant for state-of-the-art exhibits which significantly enhance the educational quality of the exhibit.