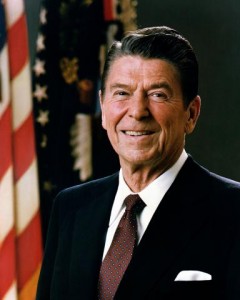 In his autobiography, Ronald Reagan: An American Life, President Ronald Reagan wrote praise of President Calvin Coolidge, saying that he “always thought of Coolidge as one of our most underrated presidents.”[1] Reagan further wrote:

He [Coolidge] wasn’t a man with flamboyant looks or style, but he got things done in a quiet way. He came into office after World War I facing a momentous war debt, but instead of raising taxes, he cut the tax rate and government revenues increased, permitting him to eliminate the wartime debt…[2]

President Reagan found much he could admire in Calvin Coolidge. Perhaps the most common story told about Reagan and his admiration for Coolidge was when he symbolically placed the former President’s portrait in the Cabinet Room of the White House. As Reagan wrote:

One of the rooms in the White House that benefited from Nancy’s [Reagan] good taste was the Oval Office, which got some new paint, a new floor, and new carpeting. I did my part by hanging up a picture of Calvin Coolidge in the Cabinet Room.[3]

Reagan’s placing Coolidge’s portrait in the Cabinet Room of the White House was more than just a symbolic gesture. It demonstrated Reagan’s political philosophy and the direction he would guide both the nation and his administration. In the presidential election of 1980 Reagan defeated President Jimmy Carter and during the campaign his major themes focused on restoring the American economy and national prestige on the world stage. Reagan promised to reign in excess government, lower tax rates, and stop the march of communism abroad. In fact Reagan stated that he was not a follower of the Nixon/Kissinger strategy of détente, but he was determined to see the United States victorious in the Cold War. These principles ushered in the Reagan Revolution. Reagan also faced a severe economic recession as he entered the White House. He also was confronted with a major labor crisis when air traffic controllers went on strike and Reagan looked to then Governor Calvin Coolidge’s handling of the Boston police strike and the principle that no one has a right to strike against the public safety.

Calvin Coolidge, whose path to the presidency was different than that of Reagan, did have some similarities. In the presidential election of 1920 Coolidge was selected by the Republican Party to run on the ticket with Ohio Senator Warren G. Harding. The Harding-Coolidge ticket won in a landslide under Harding’s slogan of “return to normalcy.” Just as with Reagan, both Harding and Coolidge faced a major economic crisis. The depression of 1920-1921 saw business decline, double-digit unemployment, and an economy faced with massive levels of wartime debt and taxation.

The politics of Harding’s “normalcy” was similar to Reagan’s remarks in his First Inaugural Address that government was not the solution to the problem, rather government is the problem. Harding’s economic program would focus on spending, tax, and debt reduction. These were very similar to Reagan’s economic policy objectives. Coolidge would assume the presidency in the aftermath of Harding’s death and he would continue the same policies. In the presidential election of 1924 Coolidge was elected in a landslide and his policies led to a period of economic expansion and growth. During his time in office Coolidge not only cut spending, but also cut tax rates, and paid down the national debt. President Reagan would also turn the deep recession that he inherited into a period of economic expansion that would last into the 1990s.

There were also some differences between Coolidge and Reagan, which reflected their respective eras. Coolidge was a supporter of restricting immigration and was a strong supporter of the tariff — a protectionist position at the heart of the Republican platform at that time. President Reagan tended to be more libertarian in regard to issues of immigration and trade, although he was not the “purest” in regard to free trade, as he often is remembered. Reagan was also an advocate of a strong presidency and utilized his gift for communication as President Franklin D. Roosevelt had done during his time in office. Reagan became known as the “Great Communicator,” while Coolidge was known as “Silent Cal,” who preferred a more restrained presidency, but also communicated great things.

Reagan and Coolidge may share a similar conservative philosophy, but they are still separated by different eras of American history. As the late historian Robert Sobel wrote:

Even so, Reagan was no more a reincarnation of Coolidge than FDR was the second coming of Woodrow Wilson. The 1980s were so different from the 1920s, the problems the two men faced so disparate. In many ways, Coolidge was the last President of the 19th century. Reagan was the man who helped bring the 20th century to its end with the conclusion of the Cold War. Coolidge was also the last President who believed in a passive executive branch in times of peace and prosperity.[4]

Perhaps the biggest divide, at least in terms of government, between Coolidge and Reagan was the New Deal and Great Society, which changed the social contract of American government. Coolidge did not live long enough to see the full consequences of the New Deal, but by the time of Reagan’s election the welfare state was a permanent fixture in the national landscape. 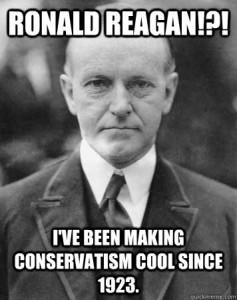 Reagan would be the first occupant of the White House to directly challenge the New Deal and Great Society legacy. Past Republican administrations had made their peace or even contributed to the growth of the welfare and administrative state, but Reagan wanted to alter the course of government and restore constitutionally limited government. Although Coolidge fought battles to limit government spending successfully, Reagan failed in his objective to cut government spending, which he regretted.

Another philosophical difference was in economics. Although both believed in limited government along with lowering spending and tax rates, Reagan believed in the supply-side school of economics. Robert Sobel argued that “Coolidge was not a ‘supply-sider’ as Arthur Laffer and his disciples were to be in the 1980s.”[5] Coolidge “meant for the tax cuts to be paid for mainly by reductions in government spending” noted Sobel.[6] Although the tax cuts initiated by President Coolidge and his Treasury Secretary Andrew Mellon are championed by supply-siders today as an example of sound tax policy, both Coolidge and Mellon also believed in the importance of a balanced budget.

Overall Coolidge and Reagan shared a similar conservative philosophy rooted in the principles of the American Founding. Both held deep respect and admiration for the Founding Fathers and their administrations reflected an urgency to restore those principles back to the nation and in the process they brought the national economy into periods of expansion and prosperity. Finally, both Calvin Coolidge and Ronald Reagan were “great communicators.” Reagan was known as the “Great Communicator,” and although Coolidge is known as “Silent Cal,” he also communicated great things through his speeches and writings.

It is with great sorrow that the Coolidge Foundation reports the passing of longtime Trustee, Thomas F. Cooley. Tom, whom our community knows well from his loyal presence at the […]