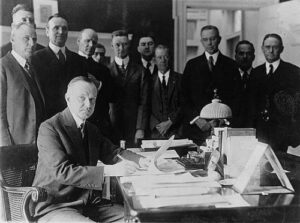 During the late 19th century and into the 20th century the farm block of American politics began to demand more from state governments and the federal government. The Populist Party movement, sometimes referred to as “Agrarian Radicalism” took shape in the late 19th century as farmers demanded regulation of railroads, crop supports, the free and unlimited coinage of silver, among other reforms. Peter Zavodnyik, in The Rise of the Federal Colossus: The Growth of Federal Power from Lincoln to F.D. R. wrote:

Farmers had formed the backbone of the states’ rights, strict constructionist Democratic Party during the antebellum period; by the end of the century they had obtained federal regulation of railroad rates — an unprecedented use of the federal commerce power. Some farmers wanted Washington to provide them with loans at artificially low rates and warehouses where they could store their crops while waiting for prices to rise — a venture that would have amazed even the most generous-minded broad constructionists of the 1850s. Farmers achieved these goals during World War I.[i]

The farm block also became a powerful faction within the Republican Party and when the Republicans took control of the federal government in the election of 1920 this faction pushed for greater government involvement in agriculture. In the aftermath of World War I the nation was faced with a severe economic downturn, the depression of 1920-1921, which was widespread.

Agriculture was also suffering as a result of this depression. As Robert Sobel wrote:

High food prices had encouraged farmers to expand their holdings and invest in machinery. Wheat acreage rose from forty-eight million acres to more than seventy-five million between 1914 and 1919. Iowa farmland that sold for $82 an acre in 1910 went for $200 in 1920. Then, as a result of the European recovery, American farm exports slumped from $4.1 billion in 1919 to $1.9 billion in 1922. Commodity prices collapsed in the face of oversupply, with corn and wheat leading the way. Land prices declined sharply, especially in the Midwest. There was some recovery after 1922, but the circumstances in the nation’s agricultural heartland remained serious, and farmers there called for government assistance.[ii]

The depression of 1920-1921, which was a severe economic crisis with double-digit unemployment and business downturn, was short lived, because of the policies initiated by President Warren G. Harding. President Harding, and later, President Calvin Coolidge turned a severe depression into a historic economic recovery by reducing spending, cutting tax rates, and paying down the national debt, but “even as the rest of America enjoyed a boom during the 1920s a depression gripped rural America.”[iii]

In response to the agricultural depression of the 1920s the farm block in Congress turned to what became known as McNary-Haugenism. McNary-Haugen was sponsored by Senator Charles McNary of Oregon and Representative Gilbert Haugen of Iowa. “McNary-Haugen was a plan whereby farmers would sell their surpluses to the government, which would then market them abroad,” noted Robert Sobel.[iv] Paul Moreno wrote that “the principal farm-aid plan was to establish a Federal Farm Board to purchase certain commodities at prices equivalent to those of the prosperous pre-war period, and to ‘dump’ the surplus in foreign markets.”[v] In addition, “the loss would be offset by an ‘equalization fee’ paid by the farmers,” noted Moreno.[vi] The policy objective of McNary-Haugen was to elevate commodity prices and restore prosperity to agriculture by ending the surplus, while providing “a minimum price for their crops.”[vii]

The McNary-Haugen legislation proved to be popular, but it also divided the Coolidge administration. President Coolidge, along with Secretary of the Treasury Andrew Mellon and Secretary of Commerce Herbert Hoover opposed the legislation, while Vice President Charles Dawes gave his support to McNary-Haugen. President Coolidge would veto the McNary-Haugen bill each time it reached his desk. The Congress even failed to override President Coolidge’s second veto of the farm measure, which he believed would do more harm than good to agriculture. “Coolidge believed that raising agricultural prices would encourage farmers to increase their production, which would require more subsidies, and the process would be repeated,” wrote Sobel.[viii]

In his veto message of 1928, President Coolidge described McNary-Haugen as unconstitutional and not sound public policy.[ix] In his veto message Coolidge argued that the legislation would create price-fixing and that “a bureaucratic tyranny of unprecedented proportions would be let down upon the backs of the farm industry and its distributors throughout the nation…”[x] In regard to price-fixing Coolidge stated:

This measure is as cruelly deceptive in its disguise as gov­ernmental price-fixing legislation and in­volves …the impossible scheme of attempted governmental control of buying and selling … through political agencies…. The bill carefully avoids any direct allusion to such price-fixing functions, but there can be no doubt about its inten­tions … to impose upon the farmer and upon the consumers of farm produce a regime of futile, delusive experiments with price fixing, with indirect governmental buying and selling, and with a nationwide system of regulatory policing, intolerable espionage, and tax collection on a vast scale. These provisions would disappoint the farmer by naively implying that the law of supply and demand can thus be legis­latively distorted in his favor. Economic history is filled with the evidences of the ghastly futility of such attempts. Fiat prices match the folly of fiat money….[xi]

Coolidge also described the consequence of the equalization fee as “a most dangerous nullification of one of the essential checks and balances which lie at the very foundation of our Government…”[xii] Coolidge argued that this would “certainly involve an extraordinary relinquishment of the taxing power on the part of Congress…”[xiii] Another reason why Coolidge opposed McNary-Haugen was that it depended on the actions of foreign governments, which went against the America-first policy tendencies of the Administration. As Coolidge argued:

To stake the future prosperity of American agri­culture upon the course of action to be taken by foreign governments acting un­der such hostile impulses is altogether too hazardous. . . . The real objective of the plan in this bill is to raise domestic prices to artificially high levels by governmental price fixing and to dump the surplus abroad….[xiv]

Finally, Coolidge offered some solutions to Congress in his veto message to resolve the farm crisis:

We should avoid the error of seeking in laws the cause of the ills of agriculture. This mistake leads away from a perma­nent solution, and serves only to make political issues out of fundamental eco­nomic problems that cannot be solved by political action…. I have believed at all times that the only sound basis for further Federal Government action in behalf of agriculture would be to encourage its ade­quate organization to assist in building up marketing agencies and facilities in the control of the farmers themselves. I want to see them undertake, under their own management, the marketing of their prod­ucts under such conditions as will enable them to bring about greater stability in prices and less waste in marketing, but en­tirely within unalterable economic laws. Such a program, supported by a strong protective tariff on farm products, is the best method of affecting a permanent cure of existing agricultural ills. Such a program is in accordance with the American tradition and the American ideal of re­liance on and maintenance of private ini­tiative and individual responsibility, and the duty of the Government is discharged when it has provided conditions under which the individual can achieve success.[xv]

Coolidge’s opposition to McNary-Haugen demonstrated his consistence within his political philosophy and preferred policy preferences of a limited government, but the farm block would continue to push for further federal involvement in agriculture and they would not see their complete victory until the emergence of Franklin D. Roosevelt and the New Deal. Today’s agricultural policies are still rooted in the New Deal tradition with farmers dependent upon farm subsidies and other supporters.

[i] Peter Zavodnyik, The Rise of the Federal Colossus: The Growth of Federal Power from Lincoln to F.D.R., Praeger, Santa Barbara, California, 2011, p. xvi.

[v] Paul D. Moreno, The American State from the Civil War to the New Deal: The Twilight of Constitutionalism and the Triumph of Progressivism, New York, Cambridge University Press, New York, 2013, p. 183.