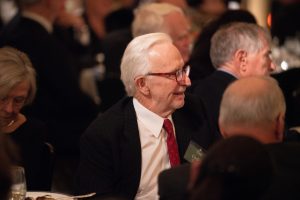 It is with great sorrow that the Coolidge Foundation reports the passing of longtime Trustee, Thomas F. Cooley. Tom, whom our community knows well from his loyal presence at the Notch and in Washington, loved Calvin Coolidge and was busy at work on a memoir of his own childhood—including years in Vermont and attendance at Burr and Burton Academy in Manchester—when he passed. A mentor to many in the field of economics, Tom will be missed by students and colleagues at New York University’s Stern School of Business, where he served for many years as dean, as well as at many other institutions of learning.

The Foundation offers its most sincere condolences to the Cooley family. “Tom was not only an active board member but a wise advisor who helped the Foundation launch both our Scholarship and Senator programs,” said Chairman Amity Shlaes. “In Tom, Coolidge found a rare friend.”

Make a gift to the Coolidge Foundation in Professor Cooley’s honor.