“I have never been hurt by anything I didn’t say.”

“Silent Cal” is one of the most famous sobriquets ever bestowed on an American president, right up there with Honest Abe, Tricky Dick, King Andrew (Jackson), and my personal favorite, His Rotundity (John Adams). As evident from this list, presidential nicknames are not necessarily bestowed out of affection, as with a pet name; they often have less to do with policy or accomplishments and more with the president’s personal attributes and idiosyncrasies. With Silent Cal, it appears to be both poking fun at his laconism and an indictment of perceived political weakness.

Yet perhaps modern politicians could learn something from Silent Cal. After all, Coolidge held eight public offices, including governor, vicepresident, and president, and lost only one election, which was for a local school board. Perhaps Coolidge won in part because of his brevity, not in spite of it. 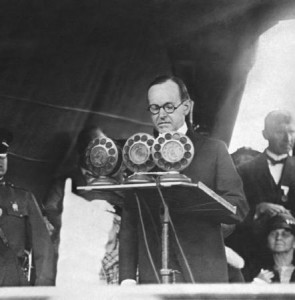 The virtues of silence may be even more important in elections today, given the rise of social media. Indecorous off-hand remarks, inappropriate texts, or inadvertently offensive tweets can ruin a person’s public image and create scandal. Mitt Romney learned this lesson in 2012 when a journalist secretly recorded his less-than-tactful remark about the 47% of Americans who do not pay income tax.

As every speech, conversation, and gesture gets uploaded and cataloged for the world to scrutinize, modern political candidates can learn from Silent Cal’s example: say precisely what you mean and do not fear silence, because what you say can and will be used against you in the court of public opinion.

One Response to “Silence is Golden: What Politicians Can Learn from Silent Cal”